Specialist Charles “Charlie” Lemon is proud to call himself a United States Army 19 Kilo Tanker and was on his first deployment to Iraq during the summer of 2011. On June 8th, what appeared to be a day of normal operations, Charles’ life was changed forever. Charles’ vehicle was hit by a missile, amputating both of his legs on contact. 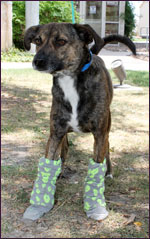 In a whirlwind of events and blur of emotions, Charles was immediately evacuated for treatment, but his injuries were so severe and he had lost so much blood that there was little hope for his survival.

Three months and 19 surgeries later, Charles celebrated his 29th birthday at his home in San Antonio with an abundance of friends, Army comrades, and, most importantly, his mother Cherl and younger siblings Kimberly and Brian. Several days later and wanting to keep the birthday festivities going, Cherl decided to head over to the San Antonio Humane Society in search of a therapy dog and companion for Charles. She had seen Charles interact with a friend’s dog and knew then that there was something about the connection between her son and these amazing animals that was unlike any other relationship; there were no questions, no stares, no boundaries, just love.

“I searched up and down the shelter, and there was one dog that met my eyes and would not look away from me,” Cherl said. “He just looked at me and I knew he had already chosen me to be his new owner.”

Little did Cherl know, the dog that had chosen her was none other than our beloved Trooper. Much like Charles, Trooper was believed to be critically injured. Specialty veterinarians thought he would never be able to lead a normal life because of his carpal hyperextension, a disease that prevents him from being able to support his body and walk without assistance. “His situation is perfect for our situation,” Cherl said as she rubbed the goose bumps on her arms. “The doctors told my Charlie that he had super human strength because of his unbelievable recovery and now we’ll have ‘Super Trooper’ in our lives.”

Cherl says she’s most looking forward to spoiling Trooper and training him to be a service and companion dog for Charles. “He won’t be like any normal dog. He’ll sleep in our beds at night just like a person and then it won’t matter that he can’t walk far because he’ll be able to ride around with Charlie,” Cherl said. “And who knows, if we’re lucky maybe he’ll be a little chick magnet too. It’s going to be amazing to see what they do together.”

Cherl also hopes that with Trooper beside him, people will be more inclined to approach Charles to learn about his story. “You can tell that people are curious and want to know what happened when they see Charlie. It’s so much easier to meet people through animals, and I hope people will ask about Trooper and his braces as a way to open up and begin a dialogue with Charlie,” she said.

When you hear Charles and Trooper’s stories, you can’t help but feel proud and humbled by these two remarkable souls, that despite everything they’ve been through, they remain positive, upbeat, and excited about what life holds for them. There is no doubt in our minds that Charles and Trooper were meant for each other, and it just goes to show, no matter your circumstances, there is a perfect pet for every person. Congratulations Charles and Trooper!