On November 11, we will be celebrating Veterans Day by remembering and honoring the military personnel who have served for our country. Although the military have many concerns when being deployed, one that tends to be overlooked is the care of their pets when gone. Who will look after them while their best friend is away? There are many pet organizations that help with fostering military pets during their deployment period. It is a huge relief for the soldiers to know that their furry friends will be cared for until they arrive home. Want to help? See our foster information.

After arriving home from a long deployment, unfortunately some veterans develop Post Traumatic Stress Disorder. Recently, dogs have been put into the lives of military men and women to help them cope. The therapy and service dogs assist with many mental and physical ailments. Anxiety is a common feeling for some veterans, and the therapy dogs are trained in specific PTSD tasks such as ease concern about blind spots by actually going around a corner to make sure it is safe. Some military individuals have even called their therapy dog their eyes and ears!

Pets have an enormous effect on veterans when they come home, but can also be an important part of a soldier’s day during deployment. One heroic dog named Layka was working with Special Forces in Afghanistan and was dispatched to search a building for explosives. While doing so, she was ambushed and shot numerous times by an assailant.  Despite her injuries, she was able to protect her pack by attacking her enemy. Layka was awarded an unofficial medal to be recognized for her sacrifices. She is now resting comfortably with her handler.

This Veterans Day, keep in mind all the heroes of the military and a big role that a pet can play in their lives. 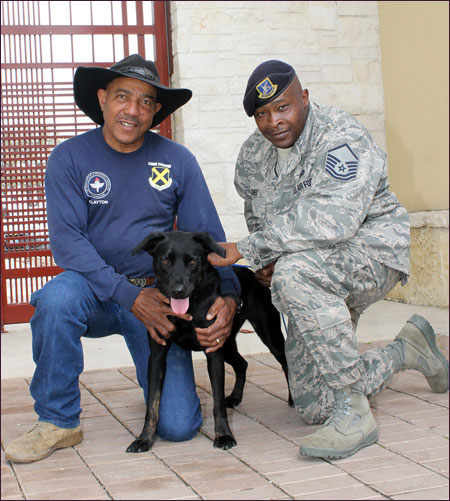 Bark! Bark! Bark!
Canine Rivalry
Children and Dogs: Important Information for Parents
Crate Training Your Dog
Dealing with Normal Puppy Behavior Nipping and Rough Play
Dealing with Normal Puppy Chewing
Destructive Chewing
Developmental Stages Of Puppy Behavior
Dog Bite Prevention and Treatment
Dog Toys And How To Use Them
Dominance in Dogs
Heartworm Information
Housetraining Your Puppy
How to Solve the Digging Problem
How to Use a Head Halter
Helping Your Dog Overcome the Fear of Startling Noises
Inside or Out Making Your Dog Part of the Family
Introducing Your New Dog To Your Resident Dog
Keeping Your Dog Confined To Your Property
New Puppy Dog Supplies
Newborn Puppies - How to take care of them
Nothing in Life is Free
Puppy & Dog Care
Re-Housetraining Your Adult Dog
Sample Aversives for Dogs
Separation Anxiety
Submissive and Excitement Urination
The Canine Escape Artist
The Educated Dog
The Fearful Dog
Understanding Aggressive Behavior In Dogs
Why Dogs Bite - A Guideline For Children

Allergies in Pets!
Moving With Your Pet
Pet Theft Prevention
Preparing Your Pet For Baby's Arrival
Successful Cleaning to Remove Pet Odors and Stains
To Spay or Neuter
Travel Tips
Territorial Marking Behavior In Dogs And Cats
Unusual Eating Habits In Dogs And Cats
Vaccination Guidelines
Quality of Life to the End of Life (By Alice E. Villalobos, D.V.M., DPNAP)

All Pet Care Tips (PDF files only unless otherwise indicated) are Copyright 2000, to Denver Dumb Friends League and Humane Society of the United States. All rights reserved.