The San Antonio Humane Society (SAHS) is taking in nearly 90 cats and dogs to help assist shelters along the Gulf Coast in advance of Hurricane Laura. The first group of pets, 20 dogs and 10 cats, were flown in from the Jefferson Parish Animal Shelter in New Orleans to San Marcos, Texas on Tuesday (August 25) night with the help of Wings of Rescue. When they arrived at 8:30 p.m., a SAHS team was already there ready to greet them and help transport them to the shelter.

The SAHS also coordinated and helped transport 39 cats, 9 dogs and 11 4-month-old puppies from the Humane Society of South East Texas in Beaumont, Texas this morning. The SAHS team left at 4 a.m. with three vehicles and picked up the animals to ensure the shelter has space for relief efforts before and after the hurricane, which has strengthened to Category 4 and is expected to make landfall Wednesday night into early Thursday near the border between Louisiana and Texas. 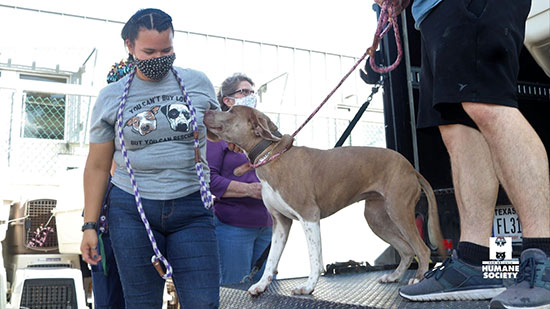 “As a destination shelter well outside the storm’s path, the SAHS stands ready to assist displaced animals as Hurricane Laura continues to threaten our coastal states,” SAHS President/CEO Nancy F. May said. “By relocating shelter pets from areas at high risk for damage, we are both bringing those animals to safety and freeing up much-needed space and resources for displaced pets after the storm.”

As soon as all the kennel spaces fill up at the SAHS, the shelter has already organized and set up temporary crates in its Education Building for the new, incoming pets.

SAHS Chief Veterinarian Kristine Hawkins, who travelled to Beaumont to assist with the transport, is glad to be able to lend a helping hand to fellow animal shelters during this time of need.

“The animal rescue and shelter community are a small, tight-knit community and strongly believe in the mission of saving lives across the board,” Dr. Hawkins said. “If we can help others in this field with their animals in a time of crisis, we are lucky to be able to.”

All of the animals will be available for adoption through SAHS’s no-contact adoption process once SAHS veterinarians have cleared them medically.

The SAHS encourages our community to adopt or donate to ensure these animals find their forever homes - SAhumane.org/donate.

All the pets were driven to the SAHS from the Houston SPCA, who received the dogs after Wings of Rescue flew in them from the Louisiana SPCA as part of the rescue efforts on Monday.

“We are grateful that the SAHS can help assist other shelters in our state during this emergency,” SAHS Clinic Assistant Supervisor Jennifer Garcia said. “Hopefully, we can help find these pups a loving home soon.”

The dogs will be available for adoption as soon as they are cleared by SAHS veterinarians. 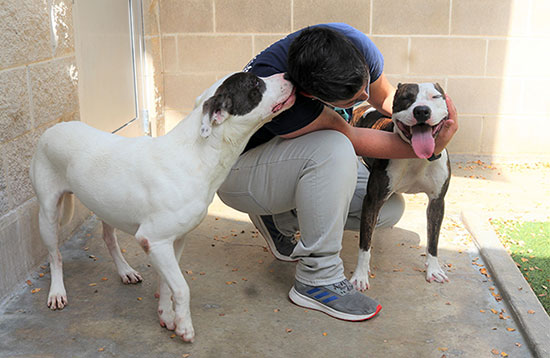