Zelda saved from a ditch 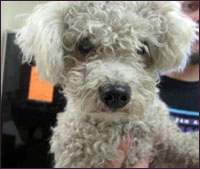 Poodles, like lots of dog breeds, have a certain stereotype that they do not necessarily embody. Often they are seen as being dainty, spoiled, and sassy, but if you’ve ever come across a Poodle not putting on a show for the judges, these are probably not the choice words you would use to describe this fluffy four-legged friend. In addition to being highly intelligent and active, Poodles are also a resilient breed who let very few things get them down. This past Tuesday, the 19th of February, a miniature Poodle named Zelda came into the shelter to disprove all stereotypes that ever existed about Poodles and little dogs like her.

A few hours before arriving at the shelter, Zelda was found by a former SAHS volunteer and her son. While strays are found all the time, they are rarely discovered in the predicament that Zelda found herself in that afternoon. To their horrid surprise, the rescuers pulled over to find Zelda scrambling around at the bottom of a drainage ditch, covered in mud and slime, slipping back down as she tried to pull herself out of the mess. Unable to watch her suffer a moment longer, the son climbed down to reach her, ending up just about as dirty as she was in the process. Zelda was scared at first, but eventually let him lift her up and carry her to safety.

The family took Zelda back to their home to try to clean her up before bringing her to the shelter, but a bath only washed away so much of her recent past. Finally past a little of the muck and grime, they looked down into Zelda’s eyes and noticed that something was different. Realizing they had done all they could to make her comfortable, they scooped Zelda up and brought her to the San Antonio Humane Society.

Once she arrived at the shelter, the clinic staff evaluated her health and found that despite being a little dirty and hungry, Zelda seemed to be in pretty good overall shape. But still they noticed that something was not right with her eyes and called Chief Shelter Veterinarian Dr. Courtney Bridgeman to further evaluate. Unfortunately, Zelda’s struggle for the day wasn’t quite over.  After a thorough evaluation, Dr. Bridgeman concluded that Zelda may suffer from a genetic degenerative eye condition that has left her nearly completely blind. There was no doubting her blindness, but it would take further evaluation from an eye specialist to confirm the diagnosis. In the meantime, we decided that a spa-worthy bubble bath, delicious meal, cozy bed, and lots of love and attention was what Zelda really needed to end the day; and that is exactly what she got.

Until we know a little more about what is going on with Zelda and her sight, she is enjoying her time here at the San Antonio Humane Society. So far she’s been the star of a Behind the Scenes tour, spent the majority of her time snuggled up close to whoever she’s near, and enjoying timely meals and bountiful bowls of water from a bed fit for a princess. Stay tuned to learn more about Zelda, we’ll keep you updated on what’s going on and when she’ll be available for adoption!