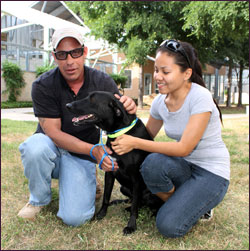 As adopters Derek & Jessa walked back into the adoption lobby to finish filling out paperwork, I held on to the leash of their soon-to-be companion, Cheeky aka Heidi Klum, trying to comfort her as she whined for them at the window and followed them with her eyes. Heidi had only known Derek & Jessa for a few hours, but she already knew they were her family and she belonged with them.

I first met Derek & Jessa on May 1st, the first day of the “Black is Always In Style” adoption event at the San Antonio Humane Society. I was out in Kennel B hanging up flyers announcing our $25 adoption fee for our dogs with gorgeous black coats, when I stopped to ask if they needed help. For a moment they stood there staring at an empty kennel where Heidi was supposed to be and then slumped as they told me they were hoping to adopt her, but it looked as if someone else had beat them to the punch. Not only did they want to take Heidi home, but they had found a cat named Binx they wanted to add to their family as well and were looking forward to seeing how they got along. Before I could even look around for Heidi, another SAHS staff member came to the rescue; Heidi wasn’t out with another family, she was in her kennel yard waiting for them to return. As disappointment on Derek & Jessa’s faces quickly turned to elation, we all waited together as a meet and greet was organized to see how Heidi would do with her possible new baby sister, a 6 month old cat named Binx.

As we waited for the staff to prepare for the meet and greet between Heidi & Binx, I was lucky enough to have a moment to talk with Derek & Jessa. It didn’t take long for me to realize how important adopting these animals was to them. Just a week prior, they had lost one of their best friends, a cat named Hucca Bucca. Hucca Bucca found Derek against all odds: at 2am, in negative 20 degree weather up in the Colorado Rockies, somehow Derek heard Hucca Bucca’s scratch at his door, and they had been together ever since. “Hucca Bucca, what a pal,” Derek said. “That cat was such a trip, and my best friend, she went everywhere with me. Rode across country with me, curled around my neck and even walked out to the mail box with me and said hello to the neighbors. But now our house is so empty; we open the door and no one is there waiting for us. I feel like our time is not well spent when we don’t have a pet to love.”

Just a year prior, Derek & Jessa also lost another close friend unexpectedly, their other cat, oddly enough named Binx.  “When I saw Binx in the kitty cottage it was like it was meant to be. My cat that I lost a year ago to a fluke infection was also named Binx and I knew that seeing this girl, she was ours,” Derek said without hesitation.

As the three of us stood huddled by the door to the education room, watching the meet and greet in progress, we all couldn’t have been happier as Heidi wagged her tail at meeting her new sister.  The wag of the tail sealed the deal, they were going home together. Although Derek & Jess originally came in looking for a cat, Derek said, “We came in and saw Heidi, she came straight to the window, shaking like crazy with excitement. We took her out and I said sit and she sat right down. It was then that I realized I wanted one of the dogs that may not get scooped up right away. Everyone wants a puppy; I know those little ones won’t get left behind. It’s the older dogs and cats that I want to take care of. In the end, I’m a whatever person: dog, cat, it doesn’t matter, I’ll even stop to feed the cows if I can.” 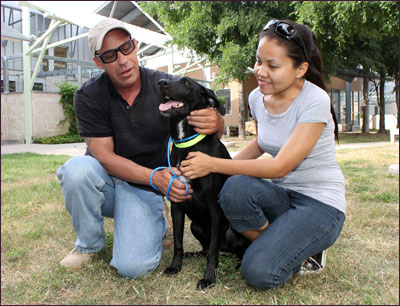 After a quick new family photo, I parted ways with Derek and Jessa as they finished up with the adoption process and I walked Heidi back to her kennel to wait for just a little while longer. She cried as she parted from her new family, but I reassured her it wouldn’t be long before she would be headed home.

Since saying goodbye, I’ve kept in touch with Derek, Jessa, and “the kids” as they are fondly referred to. The four of them are happy as can be. Heidi (now known as Cheeky) and Binx have become fast friends, although Cheeky does have her moments of jealously when Binx is in possession of a toy she’d like to get her paws around. Binx comes when she’s called and Cheeky knows the sound of Derek’s van so she is always the first one to greet him when he arrives home. Most importantly, while Derek & Jessa miss their beloved pets Hucca Bucca & Binx, they are so happy to be able to love their two new kids, Cheeky & Binx. There is no doubt now, their time is very well spent.

As Derek & Jessa have thanked me many times for helping connect them with their new friends for life, I must give them thanks in return for reminding me of how truly compassionate and caring people can be.

My most sincere thanks for sharing your story with me,
Jenny Puls, Communication Associate