Jennifer and Colby finally together again 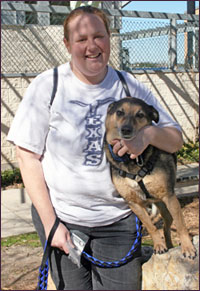 The trip to the San Antonio Humane Society on January 28th, 2011 was one trip Jennifer Gaskill will never forget; some might even say it has that “fairy tale ending.” Her journey 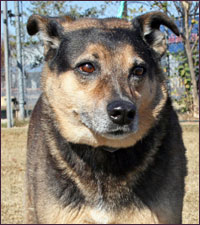 started back in September 2009 when Jennifer and her 4 year old German Shepherd mix, Colby Jack (aka Colby Jay), were moving from La Coste to Spring Branch, Texas. The daily 120 mile round trip began wearing on Colby and he became anxious, nervous, and confused. With Colby not feeling like himself, Jennifer decided to leave him with her father in San Antonio for a couple of days while she finished the move.

After settling into her new home, Jennifer started to make her way back to Colby when she received a heart-wrenching call. Colby had escaped from her father’s backyard. Devastated by the news, Jennifer rushed to her father’s home and began searching for Colby. She posted signs, contacted Animal Care Services, called clinics, and even starting checking a national watch list. Jennifer also used social networking sites like Craigslist, MySpace, and Facebook to search for Colby. Shortly after her efforts, she began receiving calls and emails concerning missing dogs, but none could confirm that they had seen her Colby.

Jennifer decided to stay with her parents in San Antonio from late September 2009 until February 2010 to continue searching for Colby. Even after returning to her new home in Spring Branch, Jennifer continued to return to San Antonio on the weekends to look for Colby. A year passed of Jennifer searching and the phone calls and emails ceased to fill her inboxes, but she never gave up hope of one day finding her missing dog. 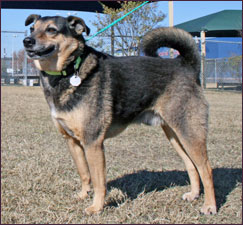 Little did Jennifer know, within days of Colby’s escape a family had taken in her dog and cared for him. They tried to find Colby’s owner by taking him to be scanned, but he didn’t have a microchip; he was only wearing a collar with the name Colby on it. The family took Colby in and loved and cared for him like one of their own. Colby fit right in and showed his new family his kind and gentle nature, especially towards their son with special needs. Though the family loved Colby, after a year and a half they could no longer provide him the care he needed. They decided the best thing they could do for Colby was bring him to the San Antonio Humane Society where he would have the best chance of finding a new home. Oddly enough, it was at this time that Jennifer decided she needed another dog in her life.

After talking with her roommate about getting a new dog, Jennifer went to bed while her roommate stayed up and logged on to the San Antonio Humane Society website to browse through the adoptable puppies and dogs. After just a few moments of scrolling through pictures, Jennifer’s roommate stopped and stared at her screen, thinking to herself, “This can’t be who I think it is!” Grabbing a picture of Colby she compared the two and then rushed to wake Jennifer. It wasn’t long before the two of them were in the car and making the drive to San Antonio once more.

They arrived to the shelter early, waited outside, and then finally ran to Kennel D to see if the dog on the website really was the Colby Jennifer had been searching for this whole time. Sure enough, when Jennifer and Colby saw each other there were howls and tears of joy. Colby could hardly contain his excitement as the kennel door opened and he was able to greet his long-lost owner. Shortly after their unbelievable reunion, paperwork was finalized, the adoption process was complete, and Colby Jack was Jennifer’s dog once more. After a long year and a half of being apart, endless searching, and emotional ups and downs, Jennifer and Colby are finally able to go to their new home, together.

Colby Jay was the name he got here at the SAHS but his real name is Colby Jack.