An injured cat in need of a leg amputation. Dozens of spay/neuter surgeries. A dog’s stressful heartworm treatment. In the fast-paced world of the San Antonio Humane Society’s on-site clinic and operating room, all this and more was experienced in the course of just one day by veterinary student Ana Hodgson. 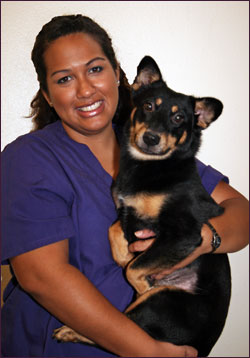 In a first-ever partnership, the SAHS welcomed Hodgson, a student at Western University of the Health Sciences in Pomona, California, for a month-long externship in hopes of sending a new veterinarian out into the field with the knowledge of what shelter animals and staff go through each day.

Two more student veterinarians will follow Hodgson with externships at the SAHS in February 2011.

When Hodgson arrived in late August, she hit the ground running, shadowing and assisting Dr. Hurst Bridgeman. Over just a couple of weeks, Hodgson cut her spay surgery time from 1½ hours to 30-40 minutes.

“She’s making me feel more confident,” Hodgson says of Dr. Hurst Bridgeman. “She’s good at doing things fast and safely. She’s taught me to communicate with staff and to communicate with clients. That’s something you don’t learn in school. I never thought of a veterinarian as an educator, but she’ll sit down and explain it. That keeps disease down, because she takes time to educate.”

For the SAHS, this first externship was a success, says Director of Operations Cynthia Martinez. Hodgson was exposed to the challenges faced by a no-kill shelter in a city overwhelmed by companion-animal overpopulation. “We have a strong desire to cultivate interest in shelter medicine,” Martinez says.

Hodgson says she likes the idea of working on “herd health,” focusing on a population rather than an individual. “I feel like I’m doing something really good for the community every time I do a spay/neuter. I’m preventing an animal from being homeless.”

A native of Yonkers, New York, Hodgson says she’s wanted to be a veterinarian since age 6, when she used to bring home stray cats. By 12, she was cleaning kennels as a volunteer, and by 14, she was working as a stable girl. “Even insects—I love insects,” she says with a smile.

Today, she is a fourth-year vet student with three rescue animals of her own: a 4-year-old miniature Schnauzer named Binky; an FIV-positive cat named Marmalade; and a three-legged black-and-white mouse named Moo. Hodgson will take her board exams in November and graduate in May. She says she would love to go into a mixed-animal practice where she could treat farm animals as well as house pets.

Wherever she ends up, her month in the SAHS operating room left an indelible mark. “The most amazing thing is the number of surgeries they do here every day,” she says.

She will carry that knowledge with her when she enters the workforce. “Whether she decides to go into private practice or not, she’ll have a very well-rounded sense of what the shelter experience is,” says Clinic Supervisor Sara Phippen.

Though her time at the SAHS was short, she will be missed. “She is so compassionate,” says Phippen. “She is in touch with the animals. I will be very sad to see her go.”