Medical Clinic
- DIVERSIFY and EXPAND the types of cases we are able to receive.
- Isolate the management of contagious, but treatable, diseases.
- Increase space to hold and care for animals awaiting and recovering from treatments or procedures.
- Create new and separate spaces for animals in need of specialty surgery and rehabilitation.

Overall Capital Improvements Benefits
- Construct separate holding bays for pets within each functional location of the building in which they receive service, to include separation for cats and dogs.
- GAIN additional space to receive new pets without disrupting the existing pet population and kennel space.

Education Building Renovation
- INCREASE our community reach due to the allocation of space (once designated for various programs and wellness services) to outreach and humane education opportunities. SAHS educators continue to develop and maintain valuable partnerships with schools, youth groups, organizations, and clubs. 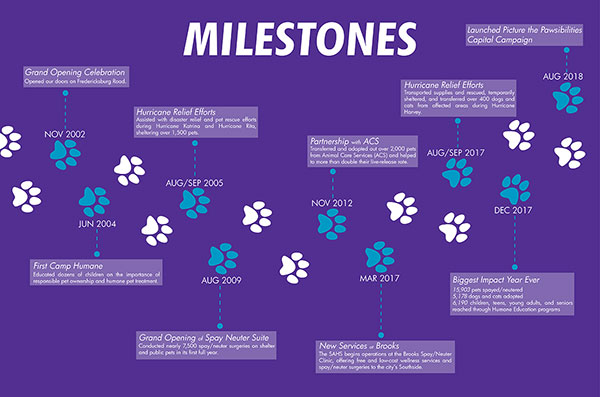 Wednesday, October 9 11 a.m.-1 p.m.
Mays Family Center at the Witte Museum (3801 Broadway St, 78209)
More info: The Friends for Life Luncheon is an annual event benefiting the San Antonio Humane Society and is a celebration of the lifelong connections made between human and pet. The event brings community members together to rally around the cause of educating the community and helping to protect and improve the lives of dogs and cats in San Antonio. Ticket and silent auction info coming soon!

Message About COVID-19 and the San Antonio Humane Society

At this moment of uncertainty, we know you are concerned about our shelter pets and staff at the San Antonio Humane Society. We are so grateful for all of our supporters, as it is only with your help that we are able to continue to provide the highest quality care for our animals during this time. While we are closed to the public, our staff remains at the shelter to provide necessary medical treatment, food, water, enrichment, and loving care to each and every one of our dogs and cats.

As a nonprofit organization, our funding is generated through multiple sources, including from our regular programs (spay/neuter, wellness clinics, and adoptions) and general donations. While we are committed to protecting the health and safety of our community during this pandemic, closing our doors temporarily will have a tremendous impact on our operating budget, and in turn, our ability to continue our mission of protecting and improving the lives of dogs and cats in San Antonio.

Please consider making a donation to our San Antonio Humane Society Emergency Fund to assist with the care of our animals and staff – we need your help now more than ever.

As a local nonprofit, we are not affiliated with the Humane Society of the United States (HSUS). We do not receive funding from the federal government, the HSUS, or the American Society for the Prevention of Cruelty to Animals (ASPCA).

Join us for a national online day of giving on Tuesday, December 3.

Your donation helps thousands of pets each year. With your support, we can continue saving lives for as long as it takes.

A gift of $35 could sponsor a night's stay for one of our shelter dogs or cats; $50 could help provide medical care for ill or injured pets; $70 could cover the cost of a spay/neuter surgery to prevent more homeless pets.

Thank you for your support, and for saving lives this #GivingTuesday!

As a local nonprofit, we are not affiliated with the Humane Society of the United States (HSUS). We do not receive funding from the federal government, the HSUS, or the American Society for the Prevention of Cruelty to Animals (ASPCA).